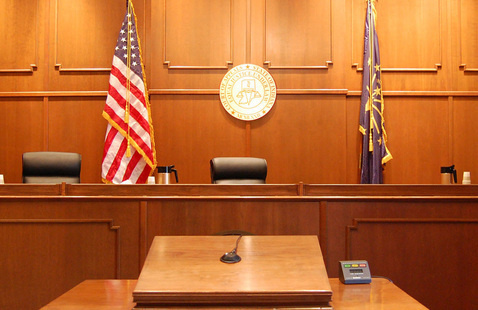 Judge Barnes was born and raised in rural Illinois. He earned a B.A. in history at St. Ambrose College in Davenport, Iowa in 1970 and received his J.D. in 1973 from the University of Notre Dame Law School.

“Judge Barnes lived an exemplary life and was simply an all-around wonderful person,” Court of Appeals Chief Judge Bradford said. “He was dedicated to public service, serving as St. Joseph Prosecuting Attorney for 20 years and a judge on the Court of Appeals for another 20 years.”

Voters chose him in 1978 to be the St. Joseph County Prosecuting Attorney, an office he held for 20 years over five elections. While prosecutor, he oversaw a staff of 65 and spearheaded development of the CASIE Center for child victims of physical and/or sexual abuse, which continues to serve the community. Judge Barnes also created a domestic and family violence unit in the Prosecutor’s office and launched a pretrial diversion program for nonviolent misdemeanor offenders that served as a model for successful state legislation.

“Judge Barnes was a mentor to many judges and lawyers, including myself,” Chief Judge Bradford said. “He was also dedicated to his wife, children, and grandchildren. He will be sadly missed, but we will honor him appropriately.”

Judge Barnes lived in South Bend with his widow, Alberta Edwards Barnes, and was an avid baseball fan and reader.

His Court of Appeals biography is available on the Court’s website.

A memorial service is pending.

About the Court of Appeals of Indiana

As the second-highest court in Indiana, the Court of Appeals hears appeals from the state’s trial courts and some state agencies. The Court hears cases only in three-judge panels, and all panels have statewide jurisdiction and rotate three times per year. Cases are randomly assigned. The 15 members of the Court issue approximately 2,000 written opinions each year. A decision of the Court of Appeals of Indiana is final unless granted further review by the Indiana Supreme Court.

Courts Court of Appeals of Indiana