Click It or Ticket campaign reminds motorists to buckle up 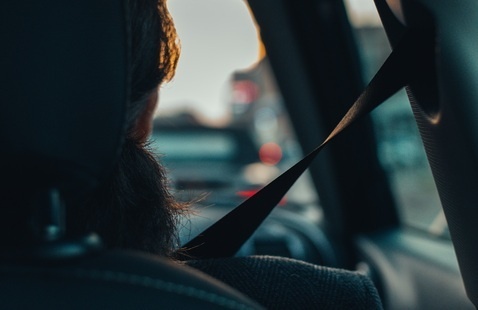 INDIANAPOLIS — On average, more than 90 percent of motorists can be found wearing their seat belts on any given day. Unfortunately, the small percentage of people who choose not to buckle up make up a disproportionate amount of the fatalities that occur every year on Indiana roads.

It’s a concern that more than 200 Indiana police agencies will be working to address this spring by participating in the national Click It or Ticket enforcement campaign. Now until June 6, officers will be out in greater numbers seeking to educate motorists about the importance of wearing a seat belt.

The high-visibility patrols are paid for with funds from the National Highway Traffic Safety Administration (NHTSA), administered by the Indiana Criminal Justice Institute (ICJI).

“If the pandemic has taught us anything it’s that life is precious,” said Devon McDonald, ICJI Executive Director. “We expect more people will be venturing out and taking road trips this spring, and wearing a seat belt is still the best way to keep you and your loved ones safe on the road.”

Between 2015 and 2019, seat belts have saved more than 69,000 lives in the U.S., according to NHTSA. Despite knowing the benefits, people still refuse to buckle up, a choice that too often can end in tragedy.

Last year, more than 800 people were killed on Indiana roads, of which, 565 occurred in passenger vehicles. Sadly, 364 of those, or 6 out of 10, were not wearing seat belts.

Out of any age group, male drivers, particularly those between the ages of 15 and 34, were the most likely to be found not wearing a seat belt at the time of a crash. Additionally, individuals not wearing seat belts were three times more likely to get injured in a crash when the driver was speeding and seven times more likely when the driver was impaired.

“There’s a common misconception that riding in the back seat or driving a large truck or SUV will keep you safe in a crash, which couldn’t be further from the truth,” said Robert Duckworth, ICJI Traffic Safety Division Director. “Buckling up is the best way to increase your survivability, regardless of what seat or vehicle you’re in.”

According to ICJI, officers will be writing citations and conducting high-visibility patrols during the day but especially at night, when unrestrained driving is at its peak (midnight to 4:00 a.m.). Under Indiana’s primary seat belt law, officers can stop and cite drivers and passengers just for failing to wear a seat belt.

Drivers can also be cited for each unbuckled passenger under the age of 16, and children under eight must be properly restrained in a federally approved child or booster seat.

Throughout the campaign, officers will be taking a no-excuses approach to seat belt enforcement, which means anyone caught not wearing one will receive a citation.

To learn more about the Click It or Ticket campaign, visit www.nhtsa.gov/ciot. Parents and caregivers can choose the safest car seat for their child by visiting TheRightSeat.com, or to find a certified Child Passenger Safety Technician, who can inspect and assist with the installation of a car seat, visit www.childseat.in.gov.