Gov. Holcomb announces next round of school bus safety patrols 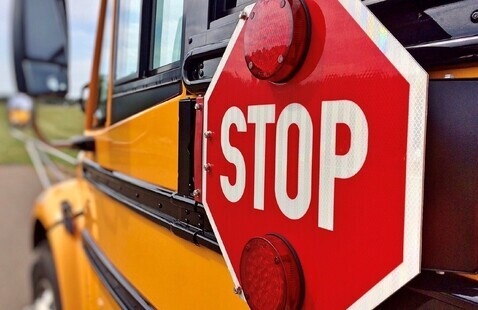 INDIANAPOLIS (Aug. 3, 2020) — Governor Eric J. Holcomb today announced that more than 200 law enforcement agencies will be conducting extra patrols to safeguard students as they get on and off the bus this fall. Over the next couple of months, officers will be positioned along bus stops and routes looking for stop-arm violations and motorists driving dangerously.

The overtime patrols are part of the state’s Stop Arm Violation Enforcement (SAVE) program, which was developed by the Indiana Criminal Justice Institute last year, funded by the National Highway Traffic Safety Administration. As part of the effort, officers will work with local school corporations and bus drivers to identify problem areas where the highest number of violations occur.

“Police officers are stepping up their efforts to keep kids safe, but they can’t be in all places at all times,” Gov. Holcomb said. “School bus safety is everyone’s responsibility. That means paying attention to the road and driving cautiously when buses are around.”

In 2019, thousands of bus drivers in Indiana participated in an annual survey and reported more than 2,500 stop-arm violations in a single day. Taking that one-day total as an average, that means an estimated 450,000 violations could have occurred during the 2019 school year.

In Indiana, it’s against the law for motorists to pass a bus that’s stopped and has its red lights flashing and stop-arm extended. This applies to all roads, with one exception. On multi-lane roads divided by a physical barrier or unpaved median, vehicles traveling the opposite direction of the bus may proceed with due caution.

“Always err on the side of caution when it comes to school bus safety. If you’re not sure what to do, just stop,” said Devon McDonald, ICJI Executive Director. “The best way to think about it is to drive like it’s your child boarding or riding that bus.”

Working to address this issue, state lawmakers passed legislation last year that increased the penalty for stop-arm violations. Under the law, motorists can have their license suspended for 90 days or up to one year, depending on the number of previously committed violations.

Additionally, today’s announcement comes one month after Indiana’s new hands-free device driving law went into effect – a key piece of Gov. Holcomb’s 2020 legislative agenda. The law prohibits motorists from holding mobile devices in their hands while driving, with the exception of dialing 911 in an emergency.

“We’re sending a clear message that driving with anything less than your full attention is unacceptable,” Gov. Holcomb said. “This is about preventing senseless crashes and making sure Hoosiers get from point A to B safely.”

ABOUT THE SAVE PROGRAM
Launched in 2019, the Stop Arm Violation Enforcement (SAVE) program works to provide safe transportation routes for students going to and from school in Indiana. Grants are awarded to law enforcement agencies to conduct high visibility patrols along school bus stops and routes, which are identified by coordinating with local school corporations, bus drivers and other key officials. SAVE is funded by the National Highway Transportation Safety Administration and administered by the Indiana Criminal Justice Institute.