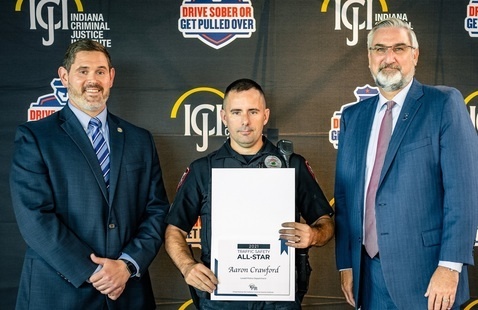 INDIANAPOLIS — Governor Eric J. Holcomb and Indiana Criminal Justice Institute Executive Director Devon McDonald presented 65 Indiana police officers with the Traffic Safety All-Star Award for working to save lives and put a stop to impaired driving. To qualify, the officer must have made at least 20 OWI arrests and participated in one of the state’s targeted enforcement campaigns during the previous year.

“I couldn’t be more grateful for the work these officers are doing to keep our roads and communities safe,” Gov. Holcomb said. “They’ve demonstrated their commitment day-in and day-out to curb impaired driving, and people are alive today because of their efforts. I want to congratulate these officers on their well-deserved, hard-earned achievement.”

In total, the officers recognized made 3,163 OWI arrests across Indiana in 2020.

The recipients were nominated by their departments as some of the top officers for OWI enforcement. In addition to their normal patrols, they often worked overtime picking up extra shifts during state and national enforcement periods – one of which is kicking off this week: the Drive Sober or Get Pulled Over mobilization.

Now until Labor Day, more than 200 police agencies throughout the state will be increasing patrols and cracking down on drunk driving, which claims the lives of more than 10,000 people every year in the U.S. That’s approximately one person every 52 minutes or 28 per day, according to the National Highway Traffic Safety Administration.

In Indiana, drunk driving has been on the rise. Of the 898 traffic fatalities that occurred last year in the state, 151, or 17 percent, were alcohol related. That’s up from 130 in 2019. During Labor Day weekend alone, there were 12 fatal collisions with one involving a driver over the legal limit.

“Impaired driving continues to take a terrible toll on our state and nation,” McDonald said. “While these overtime patrols are effective and will undoubtedly save lives, we can’t enforce our way out of this issue. It’s up to everyone to drive sober and make smart choices behind the wheel.”

In Indiana, it is illegal to drive with a BAC of .08 or higher. In addition, drivers under 21 with a BAC of .02 or higher are subject to fines and a license suspension for up to one year. Consequences of impaired driving can include thousands of dollars in legal fees, increased insurance rates, loss of license, a criminal record and possible jail time.

To avoid those, plan a safe and sober ride home before going out. Even if only one drink is consumed, designate a sober driver or plan to use a rideshare service, public transportation or taxi. Motorists that encounter a drunk driver on the road are encouraged to call 911.

Note to the media: Click here for a list and photos of the 2021 Traffic Safety All-Star award recipients, who were recognized during a ceremony at Victory Field in Indianapolis. In each photo, the recipient is in the middle with ICJI Executive Director Devon McDonald on the left and Governor Eric Holcomb on the right, except for the Indiana State Police photos. ISP Superintendent Doug Carter on the far right.