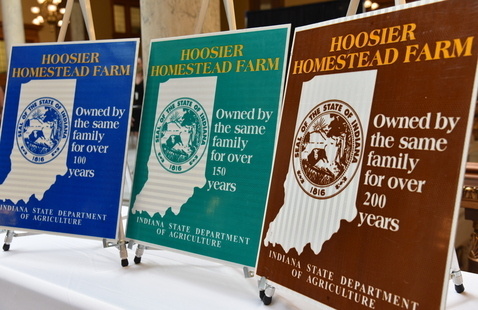 To be named a Hoosier Homestead, farms must be owned by the same family for more than 100 consecutive years, and consist of 20 acres or more, or produce more than $1,000 in agricultural products per year.

“For generations, each of the families honored today have been committed to Indiana, to agriculture and to their families,” Crouch said. “The past year has been challenging in many ways but our agriculture industry remains strong. Hoosier farmers are a big reason why Indiana remains the 10th largest farming state. I was grateful to have the opportunity to present this award to these historic farming families.”

Since the program's inception in 1976, more than 5,800 families have received the award.

“The Hoosier Homestead program is a testament to the resiliency of our Indiana agriculture industry,” Kettler said. “Each of these families have played a significant role in the heritage of our state and I am certain their legacy will continue for years to come.”

Photos from today's ceremony will be posted to ISDA's Flickr page by Tuesday, March 9, 2021. For more information about the Hoosier Homestead Award program, click here or visit www.in.gov/isda/.