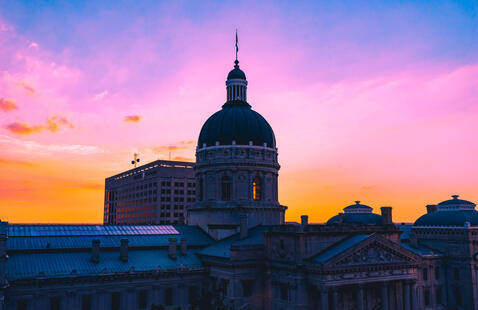 “Quality of life is important for rural areas in Indiana, and these grants will help several Indiana communities make needed improvements and upgrades,” said Lt. Gov. Suzanne Crouch, who is also Indiana’s Secretary of Agriculture and Rural Development. “As communities across the country age, funding infrastructure projects is becoming more and more important, especially water and wastewater projects. I am pleased to see many Indiana communities focusing their efforts in these areas.”

“Community Development Block Grant funding can be transformational in improving the quality of life in rural towns and cities,” said OCRA Executive Director Denny Spinner. “Over 20 Hoosier communities will now have nearly $13 million in financial support to carry out projects for public facilities, blight clearance and water infrastructure.”

The Town of Brookston is awarded $500,000 for the construction of a new fire station. The new building is approximately 7,500 square feet. The building will include six pull-through bays, shower/decontamination areas, a designated room for equipment storage and a second level mezzanine to be utilized for additional training and storage space. The site will also include parking and an access drive along South Street.

The Town of Versailles is awarded $358,600 to clear a blighted former gas station known as the Raider Gas property. This project will include the acquisition and demolition of the existing building, as well as demolition of the driveway and concrete parking areas. Additionally, the project will include the removal and disposal of four underground tanks, removal of contaminated soils from the tanks, backfill, and environmental testing and reporting to provide a safer and more sanitary environment for residents.

The Town of Cicero is awarded $455,440 for improvements to the town’s stormwater system in the Brinton Street area. The project will consist of cleaning and lining 1,380 feet of stormwater mains, rehabilitation to six manholes and four new cut connections to help prevent flooding.

The City of Dunkirk is awarded $600,000 to reduce the flooding of neighborhoods located in the southeast portion of the city. The proposed project consists of two new stormwater detention ponds at Broad Street and A Street in the City of Dunkirk. The project also includes the replacement of a portion of Dunkirk’s existing gravity storm sewer system to accommodate storm water released from the new ponds.

Newton County is awarded $500,000 to address drainage issues affecting The Plaines subdivision. In addition to new drainage pipe installation, the project also includes reconstruction of the existing regulated drain flowing from 300 North southwesterly to an existing culvert under US Highway 41, and then to an intersection with Beaver Lake Ditch.

The City of Brazil is awarded $600,000 to rehabilitate and extend the drainage system in the areas of Lenox Street, Murphy Avenue, Epworth, Pine, Beech, Sycamore and Hendrix Streets to address flooding and inflow/infiltration into the wastewater system.

The goals of the Wastewater/Drinking Water Program are to protect the health and environment, reduce utility rates for low-to-moderate income communities and improve rural infrastructure to enable long-term economic growth. Eligible Wastewater/Drinking Water Program projects include many aspects of wastewater improvements and drinking water system improvements.

The Town of Modoc is awarded $700,000 to rehabilitate the existing wastewater treatment plant and the town’s main lift station. The project will also include extensive collections system upgrades and will bring all components of the system up to code, while maintaining their current rated treatment capacity.

The Town of New Richmond is awarded $700,000 for a system-wide comprehensive rehabilitation of overall water system components to include wellfield, water treatment plant and distribution system. This will enhance water quality with iron/manganese removal, eliminate dead-end water mains, reducing water loss and increasing flow as well as increasing fire protection.

The Town of Lynn is awarded $700,000 to make necessary improvements to its water utility system. This project consists of installing new water lines, hydrants, valves and building a new elevated water tower.

The City of Martinsville is awarded $700,000 to rehabilitate several sanitary sewer pipes in the wastewater collection system in need of re-lining to alleviate current infiltration problems as well as to extend the life of the pipes. This work will greatly improve the function of the sanitary system in the areas of interest and prevent impending issues that will impact the local residents.

The Town of Goodland is awarded $700,000 to update the current lagoon system with sand filters and UV disinfection system. This will allow for year-round discharge and increased control of the lagoon system. The town will also install a lift station. This addition will relieve the strain of the town's other main lift station by taking 1/3 of the town off the aging existing lift station.

The Town of Osgood is awarded $581,481 to replace a water main by direct drilling and modifying the existing clearwell at the water treatment plant. This will result in the plant being able to produce treated water.

The Town of St. Paul is awarded $697,000 to demolish the 60,000-gallon elevated water storage tank, rehabilitate the 100,000-gallon storage tank, replace existing supply well No. 1 and replace the Supervisory Control and Data Acquisition system. Additionally, the project will rehabilitate the water treatment plant, replace customer water meters and install ten hydrants and main line valves. These improvements will result in the system operating efficiently, and will reduce water loss and safety issues at the water plant and water tanks.

The Town of West Lebanon is awarded $700,000 for wastewater treatment improvements, including converting the existing facultative lagoon to an aerated lagoon. The project also includes collection system improvements, such as raising, replacing and resealing manhole castings.

The Town of Marengo is awarded $700,000 to improve the health and safety of the residents on their wastewater system. This infrastructure project will see improvements at five locations in town including construction of a backup clarifier at the treatment plant, as well as upgrades at the four pump stations in town.

The Town of Hebron is awarded $423,500 for wastewater collection system improvements. These improvements will reduce the inflow and filtration through the rehabilitation of existing sanitary sewers and manholes.

The Town of Lizton is awarded $700,000 for improvements to the town’s wastewater treatment plant and collection system. The project will make improvements to selected portions of the collection system to reduce inflow and filtration . Additionally, the project will provide the town with adequate capacity, increasing both reliability and efficiency in the wastewater system.

Funding for OCRA’s CDBG programs originates from the U.S. Department of Housing and Urban Development’s Community Development Block Grant program and is administered for the State of Indiana by OCRA. For more information, visit in.gov/ocra/cdbg.

Under the leadership of Lieutenant Governor Suzanne Crouch, who also serves as the Secretary of Agriculture and Rural Development, the Indiana Office of Community and Rural Affairs’ (OCRA) mission is to work with local, state and national partners to provide resources and technical assistance to assist communities in shaping and achieving their vision for community and economic development. For more information, visit ocra.in.gov.