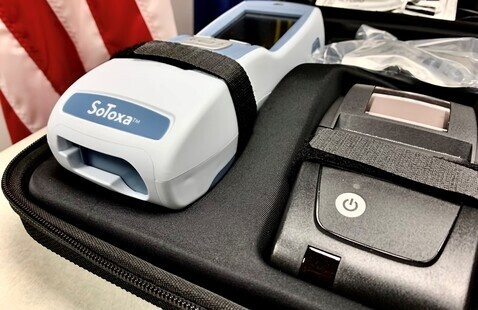 INDIANAPOLIS — The Indiana Criminal Justice Institute is providing 52 Indiana law enforcement agencies with a new roadside tool to identify and keep drug-impaired drivers off the road.

The device, called the SoToxa Mobile Test System, is a handheld analyzer that uses an oral fluid swab to detect the presence of six kinds of drugs: cocaine, methamphetamine, opiates, cannabis (THC), amphetamine and benzodiazepines.

Officers will begin using the devices in the field this month in response to the emergence of drugged driving taking place in the state and nationwide.

In Indiana, driving impaired, whether it’s drugs, alcohol or both, is illegal.

“For decades, officers have been using handheld devices such as portable breathalyzers in the field, but this is the first time they’ll be able to test for the presence of drugs,” said Devon McDonald, ICJI Executive Director. “This technology is a game changer for road safety and Indiana law enforcement.”

To use SoToxa, the officer must have both a reason to stop a motorist, whether it’s for driving erratically, speeding or another infraction, and suspect impairment. During the traffic stop, officers will use standard detection techniques such as field sobriety tests, portable breathalyzers and suspect interviews to evaluate the driver. SoToxa would not replace those techniques but would instead function as an additional roadside tool officers could use.

If drug-impaired driving is suspected, the officer can ask the driver to take the SoToxa test. This is done by collecting an oral fluid sample, which is then inserted into the handheld analyzer. Results are available roadside within five minutes and indicate positive or negative for each of the six drug categories.

“SoToxa is not a substitute for officer training or experience,” said Rob Duckworth, ICJI Traffic Safety Director. “It’s an additional resource they can use to remove drugged and dangerous drivers from using the road. Undoubtedly, this technology will save lives.”

Much like a portable breathalyzer, the SoToxa test can be refused, and the results cannot be used as evidence in court to determine if the driver was impaired. The purpose of the test is to further establish probable cause, which can be used by the officer to make an arrest, administer a certified breath test, take the suspect for medical treatment or apply for a warrant to administer a blood draw.

In total, ICJI will distribute 66 devices to 52 departments around the state. The units cost $4,500 each, are reusable and were paid for with National Highway Traffic Safety Administration funds.

Duckworth said that while departments can purchase SoToxa directly at any time, Indiana is one of the first states in the nation, along with Michigan, to have distributed the devices statewide. He added that data collected through the program will be useful in evaluating expansion of the program in 2021.

Click here to see a list of the departments that will be receiving the SoToxa Mobile Test System.