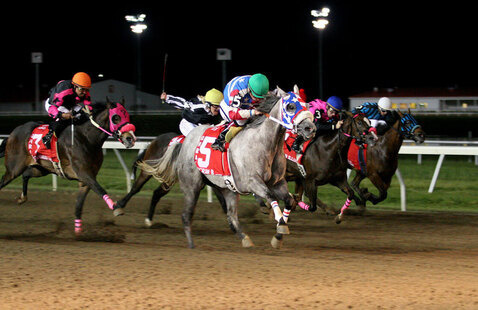 Indiana sired and bred filly Unbridled Class was named the Indiana Thoroughbred Breed Development Program’s Horse of the Year for 2019, capping a stellar year that saw the then 4-year-old filly earning $255,695 in 2019 alone.

"We are thrilled. We’re humbled," says Hillerich, a lawyer based in Kentucky. "We’re just so happy to be part of the Indiana racing scene. It’s quality people, which we enjoy, it’s a quality track, and it’s a quality experience."

The gray filly is the product of generations of breeding. Flint and Hillerich bred the dam of Unbridled Express. So it shouldn’t be a surprise that because of the banner year for the filly that her dam, Miss Carmelite, would be named the 2019 Broodmare of the Year.

It also was the start of a four race win streak and finished no worse than second from February through the end of the year, acquiring a race record of 10 starts, six wins, three seconds and one third in 2019.

The filly’s first stakes win came after a stumble at the start in the 2019 Merrillville Stakes at Indiana Grand in September under the expert tutelage of veteran jockey Rodney Prescott, finishing the six furlongs at 1:11.10.

"She (Unbridled Class) is just a really nice, classy mare," Prescott told media after winning an allowance race earlier this year. "She’s done it all, from turf to dirt to different distances. She’s won races outside of Indiana, even a stakes race."

Off the track, Unbridled Class is all class. Her favorite treats include apples, peppermints and watermelon. According to Hillerich, she has a dream temperament in her stall and on the lead. But, when she steps into the paddock and onto the track, she’s all business while staying cool and calm.

"We’ve been blessed," he says. "She’s beautiful, talented and her disposition is one of those for a lifetime."

There are no concrete plans for the filly in 2020 and beyond because Flint and Hillerich like to let her do the talking. "The horse tells you what we’re going to do," says Hillerich. "We’re just taking it day by day and making sure she stays healthy and sound. I’m looking at the long range for her—when her racing career is over, and I don’t know when that’ll be, can you imagine what a classic broodmare she will make?"

To date, Unbridled Class has earned almost $400,000, moving her to the top five for Indiana-Sired Money Earners. "She’s been so good to us," says Hillerich in terms of her lifetime earnings. "She’s won almost $400,000, and that is before getting the additional 30 percent that Bernie and I get from the Indiana breed development program—10 percent for owning the stallion and 20 percent for breeding the filly."

The Indiana bred Horse of the Year is determined by the total earnings while racing at Indiana Grand Racing & Casino in Shelbyville. Horses are eligible for the Indiana bred program if breeders follow registration and residency guidelines for broodmares and their foals. More information can be found on the Indiana Horse Racing Commission website: www.in.gov/hrc/tb

The 2019 Indiana Thoroughbred Breed Development and Indiana Thoroughbred Breeders and Owners Association award winners will be recognized during the first ever Indiana Breeders Day held at Indiana Grand on Wednesday, October 28. The day is meant to celebrate Indiana’s Thoroughbred breeders and stallion owners, and will feature a race card hosting four Indiana sired stakes, including the first running of the Unreachable Star and Lady Fog Horn Stakes, contested at 1 1/16 miles for horses three years and older. The two year olds will battle it out in the Crown Ambassador and Indian Stallion Fillies Stakes over six furlongs.