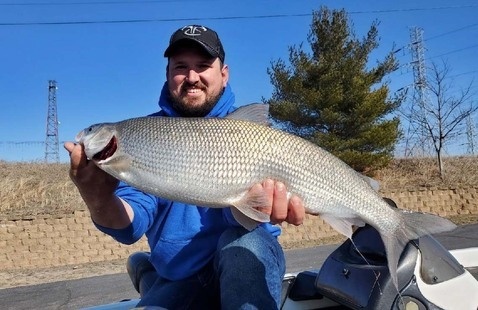 Phil Duracz of Chesterton broke the state record for whitefish while fishing on Lake Michigan near Portage on March 6.

Lake whitefish state records are the most frequently broken in Indiana in the past decade. This is the eighth time the record has fallen since 2012.

Prized as excellent table fare, whitefish are becoming more sought after by Indiana’s Lake Michigan anglers. They can be caught near shore from November to April, typically when water temperatures are below 50 degrees.

“Whitefish are usually caught by pier anglers using simple techniques, such as bottom fishing with a slip sinker rig with a short leader, small hook, and single salmon egg or piece of night crawler,” said Ben Dickinson, Lake Michigan biologist with the Indiana DNR Division of Fish & Wildlife.  “As the ecosystem changes due to invasive species, whitefish are switching from eating mostly invertebrates to incorporate more small baitfish such as invasive round gobies. “We’re also seeing more boat anglers targeting them successfully using jigging spoons or small swimbaits worked slowly on the bottom.”